I play in a band called the Otsego Jazz Ensemble.  The reason for this page is mainly informational; I’ve gone through a kind of mini-journey in my efforts to record the band over the years.  Why record live music of a band you play in?  For self critique, to find out what you need to improve on, for posterity, for samples to post on the band’s website.

Note:  all recordings on this page directly reference their location on oje.nu (the band’s website).

The goal is to find a balance between effort required for setup and effort just to be a band member.  This balance involves a willingness to spend the time and experiment with different setups and equipment to try and find something that works for your particular group.

It’s a given that if I had a mic or direct line on every member of the band, I’d have the most flexibility in post processing.  But at that level of recording setup, I wouldn’t be able to play in the band.

The Original Method: PCM Recorder Sitting on a tall Tripod

How I originally started out a few years ago:  a hand-held PCM recorder and the on-board condenser mics.  Results:  decent, if boring, too much like what the third row of the audience might hear.  I recorded this way for a few years, results were lackluster regardless of where I placed the unit.

There were several problems with this setup.  If I placed the recorder behind the band speakers, I didn’t pick up soloists very well, especially vocal.  If it was placed too close to the band or too low, balance was bad, although the stereo affect was better.  If I put the recorder in front of the speakers, the stereo affect is greatly deadened, but at least you pick up soloists and vocal.  The best option I found was to place the recorder very high (say 15 feet), far enough in front of the band for some balance, and try and capture some output from the speakers if possible (remember, this is just a 2 track unit).

Bottom line, in an ideal setting, you can get to about average if so so with a hand-held unit and its on board mics.  It will be OK, and for many folks, that’s good enough.  It wasn’t good enough for me.

So – for a 2018 dance at the Elks Lodge in Otsego, I decided to hook up some external mics to the two-track PCM recorder.  I had cables and patch setup from years ago when I used to record small groups (brass quintets mainly), and two nice vintage (over 40 years old) Shure mics (sold by Radio Shack), along with the original stands.  I separated the mics by around 18 feet, and set them on the mic stands at the tallest setting.  The mics were close to the band, but not so close that any section over-powered the sound.  Balance was decent, stereo separation and “presence” was superior to the on-board PCM recorder mics.  Still much room for improvement, but this was a start.  Here’s a recording from that day:

Splanky (May 5, 2018, Ballroom Dancing at the Elks, Otsego Jazz Ensemble)

Problems with this setup:  while a much better setup over the on-board mics, it’s still just two-track, and you have to make compromises since just two channels for input.  I experimented a little with and old vintage mic mixer I had (again, over 40 years old) to mix in a direct line from the band sound system, to evenly spread sound from soloists and vocal, but that was too much screwing around and increased the potential for issues (and if you messed up, easy to ruin the recording).

While this improved setup sounded much better, I still didn’t hear enough piano or soloists, and especially vocals.  In some gigs, I don’t pick up enough from the bass, it depends on the room acoustics.  We experimented with placing the speakers in the back (to address vocals and soloists), that helped, but this was a tad hard on some band member’s ears.

Another issue was with these old mics, as nice as they sounded, they didn’t have a very impressive high frequency range.  So the recording of Splanky above, I had to modify the original quite a bit using a software based graphic equalizer.  Once I did, I managed to get pretty close to the crispness of the condenser mics on the PCM recorder.

So, my next step was to find a pair of mics that would be usable for nature recording as well as the band.  Again, a balance, a compromise, since I’m hardly made of money.  I settled on two Shure SM 57s.  I’ve been impressed with their performance recording anything from waves to birds.  A decent all around go-to mic.

So, we continued on recording the band this way, with more experimentation with placement and adjust this and that, but ultimately this wasn’t going to cut it, two channel input just severely limits your options.

Here is a recording of the last gig where I used the hand-held PCM recorder, but this time hooked up to the SM-57 mics.  By this time I had purchased mic stand extenders, so the mics were at about 7.5 feet high.  The speakers are close so I do capture soloists decent.  This is probably as good as you are going to get with just two channels (other than increase the piano output, which is still too soft in this recording):

Some time prior to recording James (above), I finally settled on a multi-track recorder that I could easily take into the field for nature recordings and would be easy to handle on band gigs.  With up to 8 tracks of input (and all can be mics or any combinations of line input and mics), this was plenty of flexibility for recording.

I picked up two more SM-57 mics, and in testing, setting up a quad mic station for surround sound nature recording has great potential.

Problem though:  in my experimentation in recording the band at practices, each extra line introduced added significantly to the effort needed for setup and tear-down.  I needed several options depending on the gig.

Following is the easy button option that works well.

Mic placement in front of the band as I did with James (above), and add an additional line for vocal and soloists.  So three channels coming in.  This makes a world of difference when the third channel is what comes out of the speakers.  The third mic was placed only a few feet away from the speaker.  A side benefit of this setup was that the piano was being picked up by the sound system at this gig, so I picked that up as well.

Here’s a sample recorded a few months after James.  Please note, this was a VERY windy day, and I had to remove low frequencies to compensate for all the low rumble of the wind sound.  But as you can hear, the three inputs greatly improve balance:

Here are two more recordings from that same gig, but on YouTube, so you can see how tall the mics in front of the band are.  You can’t see the mic in front of the speakers, but since they were pretty much at eye level, the mic on the one speaker was as well.  Note that the recording is from the multi-track unit/3 mics, the video is from an iPhone.  Again, I had to drastically remove low frequency due to severe wind noise, so that kind of junked out the bottom of the band (sound wise):

This will probably, over time, become my go to setup when I have time.  When I don’t have time, it will be three lines of input as I described in the last section.  I haven’t tried this yet due to Covid-19 – the band hasn’t met since March, 2020 and probably won’t be back together until well into 2021, Summer or Fall.

This setup will have five sources of input for five tracks, or six tracks if we go with stereo piano, or up to 7 tracks with the better option on vocal/soloists:

Note: as of 12/11/2020, I have a good solution for this, but involves lots of speaker foam.  I’ll detail this better once the band starts performing outside again.  Or if I’m prompted to use it for Spring recordings at one of the local preserves – and there’s a lot of wind.  In quick testing, I combine the solution I already detail below (the windbag contraption) along with creating a wind barrier with a large piece of foam and some ties.  It’s a pain, but extremely effective in severe wind.

Please read this carefully:  digitally removing wind noise at recording time or post production will remove frequencies from your recording that, if it weren’t for the lousy wind noise, would be better left in the recording.  I stopped trying to record nature sounds in even medium wind before I started using my windbag.  In the band gig mentioned above, the jazz fest in South Haven, I had to remove so much low frequency to attempt to get rid of wind noise, that the band ended up sounding a tad nasal.  Or maybe even a lot more than a tad…

After spending a few hours on Google University and YouTube, I came up with a method that dramatically reduces wind noise.  I ordered the supplies from Amazon, and the materials are inexpensive, and the solution is better than the “critter hair” mics you see on sale for the price of gold (although you can create them from scratch on the cheap).  The problem with the critter hair mics is that the cheaper ones or ones you make yourself, are basically less acoustically transparent.  The professional level ones that have multi layers including foam, don’t have that issue, but are expensive.

Here’s a before/after recording where I used a large floor fan to simulate high wind conditions (I used to used this for portraits, rare occasions where I actually wanted a model’s hair to appear to be “in the wind”).  Before is with just the Shure windscreen, after is with the windbag over the Shure windscreen:

Update after extensive testing during a wind storm in Kalamazoo:  I wanted to record the beautiful sound of high winds hitting the White Pines in my back yard, but the wind gusts were too much even for this windbag contraption. Below is the unaltered recording a few days later with similar high winds, where you can still hear some low band noise.  If I edit these out, the tone of the entire recording changes slightly, which I want to avoid.  So I came up with an additional layer of speaker foam wrap over the windbag, and in testing (inside, with the fan) was able to cut significantly more low frequency wind sound.  But I don’t have enough speaker foam left to properly cover even one mic, so I ordered more on 5/8/2020.  Stay tuned.  Here’s the unaltered/unedited recording – where you mostly hear the wind going through the needles of the white pines.  If you have good speakers or headphones, you can also hear occasional low band noise (not bad, I still want to get rid of it physically, not digitally):

Here are two photos of my windbag contraption, note the reusable zip tie – this tie is a critical part of the deal, it ensures that the microphone front is not touching the speaker foam, creating a dead space of air between the Shure windscreen and the speaker foam, followed by photos of the raw materials cut to size: 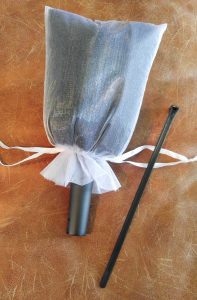 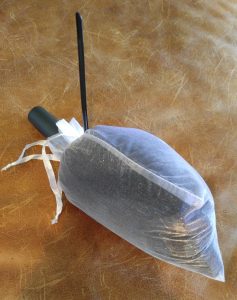 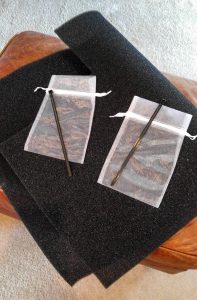 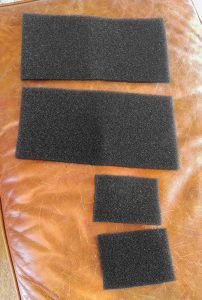 My next update will include detailed instructions and costs.  Including the $14 Shure windscreen, the cost is less than $20 per windbag.  That makes this more expensive than other DIY windscreens, but due to the effectiveness of this method and near complete acoustic transparency, if you have a lot of mics, record outside, and want quality sound to boot, this is very inexpensive.